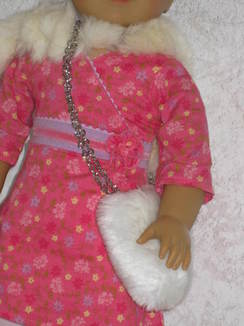 The purse
Much to Ayame's distracted displeasure (more on that in the blog), Aimi modeled my most recent craft project. My mom recently bought a lot of American Girl and Battat things, and she let me buy what she didn't want. Among some of those things was Chrissa's dress (which is what Aimi is wearing) and Molly's Earmuffs and Muff. Well, I'm not really into the muff thing for the hands, since they can't really use it. And, as soon as I saw the muff thing, an idea popped in my head. Purse! And so, I flipped it inside out, did a quick whipstitch across the end nearest the tag, and then I sewed the round side of a toggle clasp (if you don't know or aren't sure what a toggle clasp is, just do an internet search and you should find some pictures - I use the bar and ring toggles) on the other end near the opening.

After that, I took a necklace of mine that I randomly grabbed when I was getting supplies out, and clipped it on (well, one end has a lobster claw clasp (*same advice as above if you don't know what this is) and the other end had a sturdy ring, so I got another, easier to bend ring and used that to attach the other end of the necklace). Although, it ended up being long enough so that I needed to find a way to shorten it. So, I took the lobster claw end of the necklace, pulled it through the other toggle ring, and then attached it to the side that the end of the necklace was attached to. Stating this paragraph simpler, I turned my necklace into a silver, double strand, purse-chain strap. I really like how this turned out! 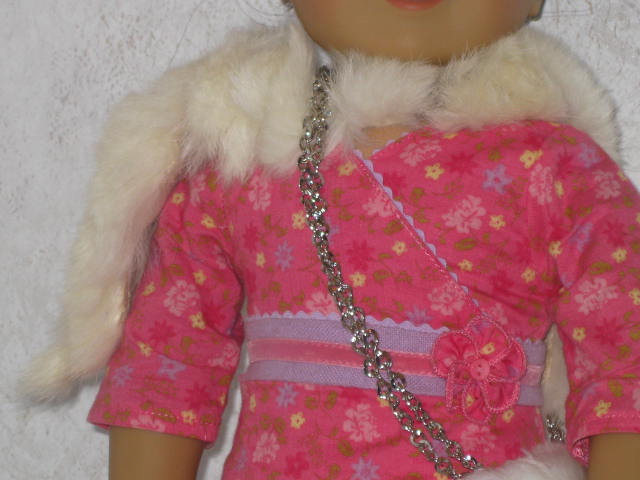 the purse strap
In case you're wondering what I meant by customizable, here is the two-part explanation:
First - I didn't permanently attach the strap to the purse, so I could remove this one. So the strap could be a simple chain, like this, or it could be gold, or beaded, cloth, etc. . .

Second, I could flip the purse inside out and then I'd have a fur-lined satin bag (although the tag would be on the outside, in this case as I don't really want to trim it. I made all the customizations easy to remove so that I could return this to a muff in case I ever wanted to sell it) ~~Also, my mom gave me an idea I might use in the future as well. By making a pillowcase-like clip-on bag, I could customize the outside of the bag even easier, and then I wouldn't have the tag in the way! Cool idea, huh?