I've heard it called a Boiling Water Dunk or the Hot Water Dunk. Basically, boil some water, let it cool a bit, and dunk the doll's hair in it. It sounded scary. I didn't want to hurt my doll (plus I couldn't find instructions, which I really wanted before  I attempted it) so I put it out of my mind. But then I found them. Instructions on how to perform this scary sounding doll hair treatment.And so, I decided to give my Josefina (renamed Yanna) the hot water dunk.

For years, Yanna has had her hair up in a bun because it was the only hairstyle I could think of that would keep it up securely, and I was afraid of leaving it down, because as everyone knows, leaving hair down leads to hair getting knotty and knotty hair means it has to be brushed. And if there is one thing about my dolls that scares me (or, at least, one thing I hate doing...), is brushing frizzy doll hair. It's an almost impossible task. And it takes forever....

NOTE: DO NOT GET WATER IN YOUR DOLL'S EYES! IT CAN CAUSE ISSUES. The instructions also said to try to keep the water aff the wig cap (the part nearest her head), especially with the hot water in later steps!
So the first step in the hot water treatment instructions I found was to wash the doll's hair. So I figured I should probably try to brush it, even a little bit, so it'd be easier to wash.
After the wash, I wrapped up her hair so it wouldn't drip all over the place.
After the hair is clean, you boil some water. I used a large stock pot since Yanna's hair is so long. After the water reaches the boiling point, you turn off the heat, remove the pan from the stove, and let it sit for 5 minutes. After the 5 minutes, you dip the doll's hair in the hot water and then brush. Make sure only her hair gets wet, and not her face or head (wig cap). I dipped Yanna's hair for the recommended 4-5 times, then brushed it, but it still didn't feel right. So I dipped it a few more times, then brushed it again. That time it felt right. 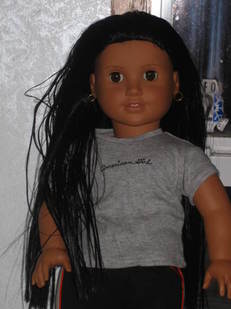 Yanna after her hair treatment
After I liked the way her hair felt, it was time for her hair to dry. I finished this at night, and the next day (around noon I think) her hair was dry. 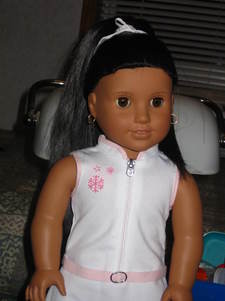 The official 'After' picture
NOTE: I am not responsible for anything that might happen to your doll if you try this. I've done this with a 18" & a mini AG, and no harm came to mine, however, I can't promise nothing bad will happen to your doll. Please be careful while handling your doll near the hot water, and like I mentioned above, take steps to try to keep water away from your dolls eyes (and the hot water off the wig cap).
And yes, I did darken her eyes. I wanted her to be a mini-me for my Sonali.

American Girl Snowy Chic mini dress (for the mini, her meet outfit and a scrap-turned-sari.