Let me start by sharing a link: http://theportalwiki.com/wiki/Chell . The picture at the top is the outfit I wanted to re-create for my dolls. Portal 2 is a really fun game, available on PC (through Steam) and Xbox 360 (through the Orange Box or by itself), and possibly other consoles. The precursor, Portal, is (I believe) available solely on PC through Steam. Portal (both) is a puzzle game. You have to get through the obstacle courses and get to the end of the game, which makes it sound so much simpler than it really is. Some levels are easy, but others you need to carefully think and plot about how to get through. It is a lot of fun, with no offensive language (that I recall, although the antagonist does love trying to insult the heroine) or unfavorable content.

Anyway, enough with the game review, and on to the dolly! :D
I started with Liberty Janes Trendy T-shirt Variations pattern, with the optional scoopneck front. After tracing the pieces onto my fabric, I used the pen to adjust the neckline on the front (made it a little higher) and around the shoulders in back (for the racer-back look). Then I cut it out and sewed it up like normal. I have found that running a zig-zag stitch (I've been using the one that looks like this: /\/\) around the raw edge, and then using that stitch to roll it over and topstitch is easier than rolling it over twice and hoping it works out evenly (I don't tend to use pins, I probably should, but I don't normally do so). The white tank top I took a few inches off the bottom to make it a cropped top. 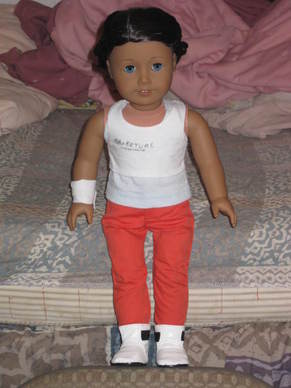 To complete the 'Chell' look, I added a pair of orange American Girl brand jeans (as I don't have any orange pant fabric, and likely won't for a long while), a white wrist brace (scraps of white fabric wrapped around her wrist), and a pair of Our Generation boots (these I got specifically for this outfit, but I must admit, they are pretty cute. I did take the bows off the back though).


Doll: Katara (#49)
Jeans: from the American Girl striped hoodie outfit
Boots: Our Generation brand from Target -originally they had black bows on the back of the boot over the velcro closure