Disney Infinity -a sort-of review and a mini picture story

NOTE: Before reading this review, please understand that I've only played as a single player -I have yet to find someone to play with, so I don't know how the multi-player aspect works.

The Disney Infinity Starter Kit comes with a baseplate, the game (on a disk in a case, like most other video games), a power disk (grants a bonus power/item -mine is from Wreck-it-Ralph, and grants a chance at bonus health), a world piece (allows access to a new level to play -the starter kit piece grants access to Monster's University,a Pirates of the Caribbean world, and Mr. Incredible's town), and three figures -Sully from Monster's Inc., Mr. Incredible from The Incredibles, and Captain Jack Sparrow from Pirates of the Caribbean (figures pictured below). It also came with a card (resembles a trading card) that has a code for the PC version of Infinity.
After you have (or even if you just want to, before my dad got Infinity I was planning on eventually getting Vanellope at least, just as a knicknack for my dolls) the Starter Kit, there are other things you can get to go with it, other figures, other playsets (At first, I didn't entirely understand what the point was in getting the playsets, as they are a lot more than just getting two figures, but after playing the game a bit, I understand now. More on that later), power discs, plus Infinity themed controllers, a carry case, storage cases, and more.

Each figure comes individually (or I saw packs of three characters too) and has his or her own special abilities. From what I've seen, the playsets come with two characters, plus a clear piece that resembles the piece below. This clear piece grants access to a new world/level to play in. 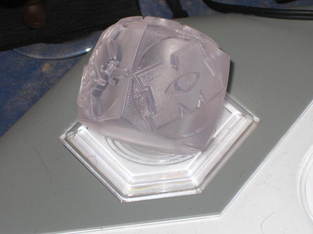 2. Play Sets
These are unlocked with those clear pieces I mentioned earlier. The play set worlds are only playable with a character from that world (for example, if I want to play Monsters University, I can only use Sulley, Mike, or Randall. Anyone else, such as Vanellope or Captain Jack aren't allowed to enter that playset). These can take a while to play, and have many quests that can be played. I've finished Monsters University, and when I went back to the Toy Box, I got to use the paintball gun, TP gun, and Crackle Backpack with Vanellope. :D

3. Toy Box
The Toy Box is a sandbox. There is the Toy Box Launch, which you can explore, or you can use the toybox to access Adventures or use it to go to your own toybox -a world that consists of a single large terrain block. In your world, you can shape it however you want, and when you can get 'spins', you can use them to try and get new things for your toybox (NPCs, terrain pieces, etc...) I haven't done too much with this feature yet, mostly when I play I've been working on the play sets.


My dad got a couple other games at the same time as this, so I've been trying to split my time between Infinity, other games, and everyday chores, plus other things online that I have going... So I haven't actually spent much time with Infinity yet. Of course, as my brothers have time at home, I'll need something to do... ;)

And now, for that mini picture story: